Online broadcast of fishing on the Kola river

Let’s get it started! To the last moment didn’t believe that will go and was ready for canceling.

Drove out on Sunday morning at 5:20. Initially we planned to go three together, proven scheme — one behind the wheel, another looks after him not to fall asleep at the wheel, and third one sleeping in the backseat. Our third one withdrew few days before, and we together with Lyova expected to drive for long and tirdeous. It turned out the opposite — record 23 hours 40 minutes (usually it was about 26 hours) and at 4:40a.m. 24/06 we are already at the trailer buy licences for the second section from 6a.m. to noon.

Not earlier because before it was the night of the ban. For the third year there is a ban three times a week from the midnight to 6a.m. — Monday, Wednesday and Friday. Not very convenient for fishers, but a chance for fish.

Shongui surprised and amused us. I knew that military pontoon bridge was demolished by ice drift (picture of 26, April 2019):

Thought it was restored but no. And now there is no any bridge — nor automobile, neither pedestrian. Because the old one completely collapsed:

This is Lyova. First time came for salmon 4 years ago. And by today lost his mind absolutely. I don’t slander on him — here is made by him a fishing schedule (pay attention on rest time tending to zero):

At 5a.m. we were met by +5°C air temperature and +10°C water. It’s good it was not raining. The water level is high, ussualy it’s lower in the end of June, though it was similar on these days in 2017. Locals say the water level has rised 20cm for the last 24 hours because of rains. We sat down each in his little boat and sailed from Shongui downstream. Agreed that the first outing will be for 3 hours. That later have a rest in the afternoon and in the evening go really. In recent weeks i heard that there was no so few fish in the Kola river ever. However, there are such talks every year. But i saw the fish exit only 3 times in 3 hours. It seems it’s true and she doesn’t active. But there are only few fishers on the river — partly because of small catch, partly because of bridge absence. Lyova didn’t have any contact with fish for three hours of catching. I had a good, full-weight bite, but it didn’t come to draw out — when cutting fish (a smooth rise of rod up) the fly jumped out of fish mouth. Presentation is straight, without streep, time is about 9a.m., sunny. The unexpected fly, completely black. Body wool + seal undercoat in … , huckle from heron and wing from bear.

I have many flies with me, about two hundreds. 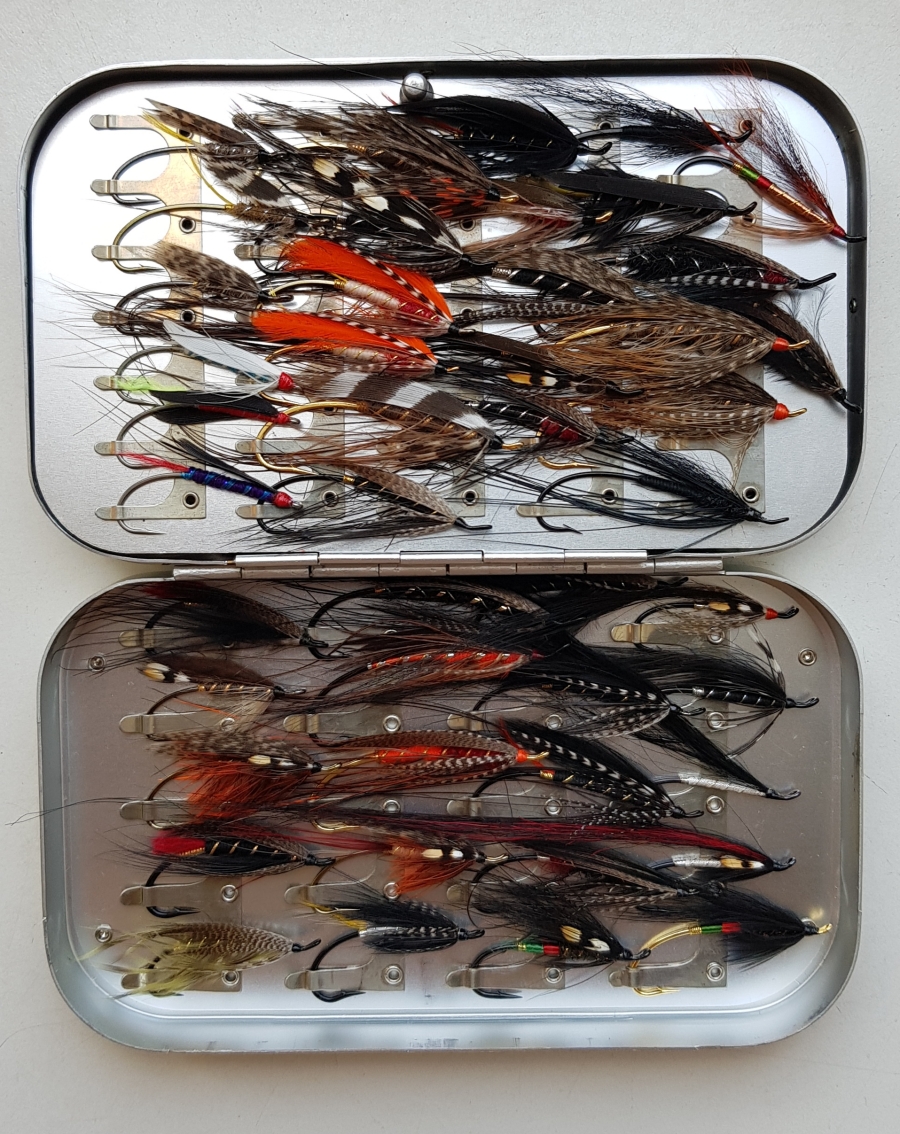 Now 5a.m. 25, June. Three licenses in row this night were unaffordable heroism, after 9 hours on the river came back in the burrow to sleep off. Found Lyova already asleep, he lost his over-optimistic schedule of non stop fishing)). Exactly 24 hours passed since arriving in Shongui, half of them is a net time of casts and flies presentations. It’s time to sum up. Caught fish =0, bites/ missed fish =1. Have not discover working flies yet, should not make conclusions on one bite, but consider this experience — for sure. Fish in the river a little, but it is. Not a lot of people, a place can be always found. The weather is great (this night +10°C and complete calm). Today trained singles from both hands very well. Tackle is the most suitable for now (will tell on details after sleep off). So prospects are seen as the most rosy. But for now — sleep! And also lost a couple of kg)).

Couldn’t get on the Kola third section. Rules changed — begin with this season there is no 24 hours licenses, only 12 hours. «Day» — from 9a.m. to 21 and «Night» — from 21 to 9a.m. And licenses not to the whole third section — it was devided into pools and amount of fishers on pools is controlled by selling limited amount of licenses on each one. On general it’s good. But i applied for license only a week ago, therefore we were offered either such remote pools that is a very uneasy to reach (and unknown if fish reached there), either normal pools but for a very inconvenient time. Catch from 21 to midnight, then ban, and three more hours of catching from 6 to 9a.m. On reflection, we refused. That is why we are going now upstream on the second section from 18 to 24-00.

Considering on which strange fly there was so far the only bite, tied one more strange fly:

Body from brown wool, in thorax seal undercoat (ginger color), brown heron and squirrel in wing. No any segmentation, tags and other color accents.

The tour was eventful. Rare case when there was a precise plan and we with Lyova have followed it. To 18:00 we were upstream on Krasniy. And right away Lyova got strong but empty bite on Raven on hook #3 Alec Jackson Daiichi and with hen wing:

In 15 minutes my fly was slightly bitten:

Half an hour later on the same Krasniy with the same fly was a very funny thing. Going in the deep wander I cast the fly on 5 meters line length in a stream. Got the position and in that moment saw how 500gr young salmon soared into the air with my fly in the mouth! It’s good — dropped, no need to think what to do with fulmar. After spending 2 hours on Krasniy, went downstream to the Big Stones. On the edge of the pool this fly was eaten by 2kg fresh silver and thin young salmon. Time about 9p.m., in the end of presentation, on strip. Very sprightly little, soared for couple minutes and got off. Then also was Sanchast’ and Garmanskiy, but without adventures.

The water fell 15 centimeters for 24 hours, there are almost no people on the river. I’ve never seen anything similar before — none of the pools we’ve been today have a single person. Of course, the lack of a bridge affects. But the main reason (most likely) — catches are very meager and in last two days (as far as i know) nobody caught anything on the Kola second section. And fish almost doesn’t show itself.

Made 2 changes in the tackle for this tour. First — changed string from 0.4 to 0.35.
Second — before fixed flies in the loop (it allows to change flies very quickly, it’s good when choosing effective fly), today changed to blank knot of Double Turtle type. Don’t know how much these changes effect, but this tour was much more effective then previous. Goal brewing…

Time 8:30, presentation — in overclock. But the most curious detail — about flies. Lyova stood on position and imagined very well where the fish stood and that it there for sure (because it’s such a place). When he tried all flies tied by him in which he believed, the turn came to several very old flies which he got together with vintage tin fly box ordered from Ebay. And then began! — fish started chasing the gloomy poorly tied artefacts on thick heavy hooks. Here are three flies, which were attacked (effective was the largest lower one):

After they will dry, i’m not sure it will happen soon))), will take better pictures. Because curious and cognitively. It’s worth paying attention, that pair of slightly different in color gamut pulpy vintage General Practitioner from the same box didn’t not receive any salmon attention.

I had fun, but nothing to put in the freezer. Six times heart stopped and body tensed. Ready to start drawing out. But it didn’t come to draw out. Two fishes in two different places attacked two flies. The first time two very exciting draws on two in a row presentations in distinguished yesterday orange fly:

Both times in a very light overclock. The second fish attacked the previous season star — Albino — four times in a row:

In overclock and 3 times on strip. In overclock bit, and on strip jumped with wave and repeled fly. Both timed further changing of presentations, flies and spells have led to nothing. As if no one had ever been there!

And so i opened too. With doublet of grealses — 1.6 and 2kg. Were caught at 20:00 and 20:30 on the same fly with absolutely different presentations. There was a real show with the first one. Long cast, strip, fish came on the surface with wave, miss, make a second stop, two strips and sure bite. Fly in «scissors», short drawing out and posthumous photo session:

In spite of stunded appearance and small weight, this specimen will be remembered for a long time.

Next «trophy» happened after 3 casts. Which were done to familiar stone. Fish often stands near it, but rather rare manage to make «effective» and productive presentation there. Floated fly with a straight presentation, made overclock, strips. And after the fourth cast 2kg male took fly when it was falling, rushed to 5m from the stone. Very buoyant fresh specimen, which had enough power to run almost to the opposite bank (didn’t clamp the fraction). Same fly, in the same «scissors»:

Have already posted the fly here two times, once again:

Bronze hook #3 Alec Jackson Daiichi, yellow tail from the golden pheasant crest, body from beige wool with dubbing from seal undercoat in chest, huckle — brown heron, teal in collar, wing from two pairs of orange cock feathers, «horns» — cock, black head. The fish is caught, it’s time to give the name to the fly. Sees «Albino Glasso», since this is a hybrid of my «Albino» and famous Orange Heron of Syd Glasso. With added tail and horns. Curious detail. I have two such identical flies — on bronze and golden hooks. Bronze one is eaten regularly already two days, golden one — no any poke. Those salmon…

And also was a sluggish, but clear bite in Alexandra on hook Partridge Bartleet Supreme Salmon #2

Body refused flately to wake up, get up and go to the river. Such arguments as there is less people on the river in the morning and that fish was more active in previous days in the morning didn’t help. Had to promise that there will not be any fishing in the evening, will be rest and sleep. The same with Lyova. Eventually — license from 6 to 12 and up part of the second section. Stars of this episode became Lyova and spey-fly Raven, tied by him with a wing from black hen (see above). Two bites, two grealses, two misses. These are 2 stories, not 6))). In both cases presentation in overclock, first one took in 8:30 on «Dam» and second one in 9:30. Instead of fish picture — «Big Stones» pool, where was missed the second grealse:

As for me — no any poke. Almost the whole license fished with «Albino Glasso». Maybe because the weather and lightning have changed — dull, cold and wind, black fly worked better then bright orange one.
Now we have two actual working flies, Lyova tie a copy of mine Albino Glasso, i — a copy of his Raven. And till tomorrow morning — rest!

Counted vodka consumption. 170gr per person in a day… Was going to hide this strange fact. But then decided, that no one would believe it anyway. And also there is an excellent «Sitro» in Shongui, do recommend.